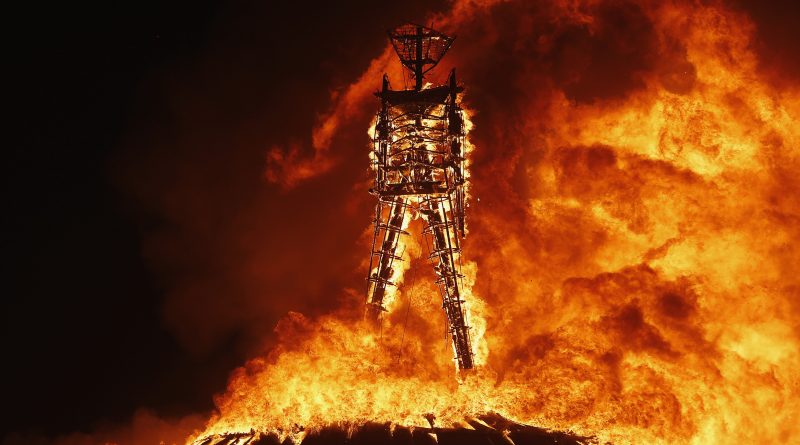 « … when he was lit he simply incandesced, and for a moment, it turned night into day. » Larry Harvey — Burning Man 1991

Re-creation of the First Burn

… it was supremely romantic. And so two years later, having thought of this morning and night for a couple of years I woke up and it was the solstice, and I thought « I’m tired of this. » So I called up a friend and I said « Let’s… let’s burn a man, Jerry. »

And he asked me to repeat that statement.

So we went over and we made this man out of scrap lumber in a basement in Noe Valley, and it looked big to us, it was two feet taller than we were.

And then we hauled it, we called a couple of friends, and there was about twelve of us, and we hauled it down to the beach and we soaked it with gasoline, because we didn’t know any better at that time. And… because gasoline as you know… we use diesel now, gasoline’s very volatile, and when it flamed up, it was like a second sun brought down to this earth, it was just… it transfixed us, but… that’s where the story begins, in fact.

Because at the moment it was lit, everybody on that beach, north and south, came running. That beach was a little like the form of our city now, with its two embracing arms around the void of the playa here. And suddenly, our numbers tripled. And I looked out at this arc of firelit faces, and before I knew it I looked over and there was a hippie with his pants on his head and a guitar standing there, materialized out of the murk. And he started singing a song about fire. Now I’m not exactly a hootenanny kind of guy, but it seemed like the thing to do, and we started singing.

The next thing we knew, a woman, impetuously, ran at the figure, and we had the urge to stop her, but it was too late. The wind was shunting all the flames to one side, and so she ran up to him and she took him by the hand, and stood there. And I think Jerry still has a souvenir photo, and you see the little hand down in the corner of it, holding his hand.

That was the first spontaneous performance, that was the first… that was the first geometric increase of Burning Man. What we had instantly created was a community. And… you know if we had done it as an art event, people would have come, and come to the gallery or something, and said « It’s very interesting, perhaps a little derivative, what are you going to do next? »