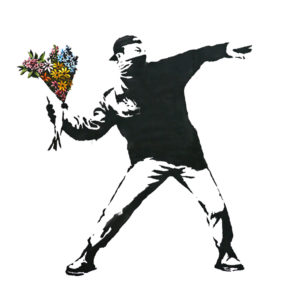 HE IS the elusive street artist whose real identity has never been revealed.

Banksy has been baffling the world for years after creating street art under a cover of darkness and never taking praise for it – here’s the lowdown on the mysterious artist.

Dubbed the Scarlet Pimpernel of the art world, Banksy is an anonymous English-based street and graffiti artist as well as a political artist.

He first burst into prominence in the early nineties as a graffiti artist whose works highlighted corruption and inequality in society with a smattering of humour.

His work was spotted around the south of England, including in London, Brighton and Bristol.

Banksy has never been unmasked and it is believe his refusal to reveal himself started as a way of avoiding prosecution for vandalism.

The artist has also dabbled in the world of film, releasing the ‘street art disaster movie’ Exit Throught The Gift Shop.

And in 2015 he opened Dismaland, a large scale installation in Weston-super-Mare lampooning Disneyland.

As Banksy has never publicly revealed himself, it is unclear what the artist actually looks like.

He always creates his work under a cover of darkness meaning nobody can be certain of his appearance.

What are the latest rumours on Banksy’s identity?

Rumours have long swirled about the true identity of street artist Banksy.

The first rumour was that Banksy was Robin Gunningham, a former public schoolboy from Bristol.

The artist’s agent refused to confirm or deny that it was him.

In 2015, fans were then convinced they spotted a man who they thought might look like Banksy outside his Dismaland installation in Weston-super-Mare.

But to their disappointment, it was later revealed to be a parking attendant from the local council.

In April 2017, a man claimed to snap a picture of one of the people thought to contribute as the famous artist.

William came forward after a woman claimed to have snapped the same man photographed in Bethlehem, where Banksy’s famous Walled Off Hotel sprung up.

Members of the public, later identified the painter as James Ame – also known as aka AM72 – a UK painter who lives in Israel.

But William thinks Ame72 is Banksy – and says he’s one of a group of artists who assume the Banksy identity, hiding in plain view.

The latest rumour about Banksy was started by the bling-toothed rapper Goldie.

The Sun revealed that the music hardman was so deep in discussion about Banksy that he called the artist « Robert ».

Fans were quick to deduce Goldie was referring to Robert Del Naja – of hit group Massive Attack – as he said during the podcast Distraction Pieces: “Give me a bubble letter and put it on a t-shirt and write ‘Banksy’ on it and we’re sorted.

“No disrespect to Robert, I think he is a brilliant artist. I think he has flipped the world of art over.”

What art has Banksy created?

Banksy has left his street art all over the world but mainly in the UK, where he is thought to be from.

The guerrilla artist’s latest work is an Brexit-inspired piece that’s been erected in Dover.

This huge blue artwork features a workman on a ladder chipping away one of the 12 yellow stars on the EU flag.

The bold design follows a controversial ‘Walled off’ hotel that Banksy opened in Bethlehem earlier this year.

The anonymous British graffiti artist based his project in the Palestinian city in a bid to attract tourists to the troubled region.

Other notable work includes writing « We are bored of fish » in the penguin enclosure at London Zoo.

He also left a sculpture of a crumpled red phone box with a pickaxe in the side in a street in Soho, central London, but it was later removed by Westminster Council.

In April 2014, he created a piece near to GCHQ in Cheltenham of three men wearing sunglasses and using listening devices to snoop on a telephone box.

He also caused controversy when he made a picture depicting Queen Victoria as a lesbian in a piece that incorporated art made by Andy Warhol and Leonardo da Vinci.